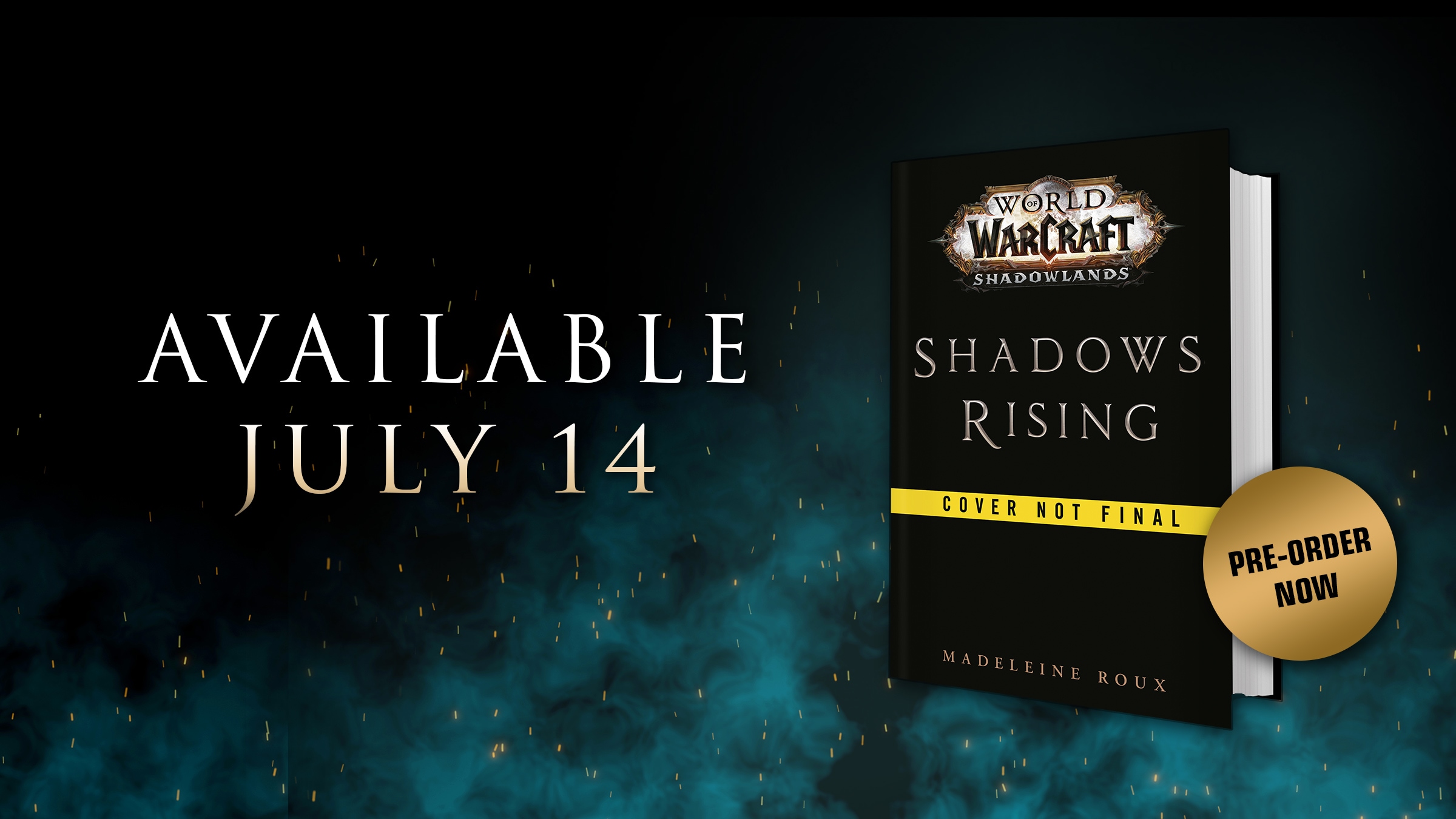 An all-new official prequel novel to the upcoming Shadowlands expansion penned by New York Times bestselling author Madeleine Roux, Shadows Rising is the next epic tale in our novel series, due out July 14. Shadows Rising is available to pre-purchase on Penguin Random House now.

Read on for a summary of things to come followed by an excerpt straight from the heart of the upcoming expansion prequel novel.

“The Horde is nothing!” With those infamous words, Sylvanas Windrunner betrayed and abandoned the Horde she vowed to serve. The Dark Lady and her forces now work in the shadows as both the Horde and Alliance, including her own sister, Alleria, race to uncover her next move. Struggling to shoulder the crushing weight of leadership, King Anduin entrusts the void elf and High Exarch Turalyon to uncover Sylvanas’s whereabouts.

The Horde now stands at a crossroads. The various factions form a council, leaving the mantle of warchief to rest. Thrall, Lor’themar Theron, Baine Bloodhoof, First Arcanist Thalyssra, and many other familiar faces rise to this new challenge. But the threats are numerous, and the distrust runs too deep.

When the council is derailed by a failed assassination attempt on Talanji—the Zandalari queen and a key ally—Thrall and the rest of the Horde leaders are forced into action. They empower the young troll shaman Zekhan, still grieving the loss of Varok Saurfang, with a critical mission to aid Talanji and help uncover the rising threat against her.

Meanwhile, Nathanos Blightcaller and Sira Moonwarden have been tasked by the Dark Lady with a terrifying gambit: to kill the troll loa of death himself, Bwonsamdi.

As Zekhan and Talanji work to save Bwonsamdi, their journey will be a key turning point in bolstering the Horde against the coming darkness and finding themselves along the way. Failure to save their allies and the trickster god will surely doom them—but through success, they may rediscover what makes the Horde strong.

Prose Pulled from the Heart

Ready to discover how the events unfold? Sate your curiosity with a taste of this excerpt.

The king of Stormwind listened to the final cathedral bells tolling. The afternoon’s last rays of sunlight speared the stained-glass windows above, casting mournful shadows across the high altar. It was a melancholy image, one that only widened the pit in Anduin’s stomach. He waited in the echo of the bells while the soft-spoken Bishop Arthur, clad all in cream, black and gold, unlocked the door leading to the crypts beneath the Cathedral of Light.

“Six.” The answer came from Anduin’s close friend and trusted advisor, Genn Greymane, King of Gilneas. “Or rather, SI:7 discovered six. No one can say how many were washed away by the tides.”

“More could be in hiding,” High Exarch Turalyon pointed out. He stood tall and broad, his Light-forged armor a polished and impressive silver and gold. Bearded, scarred, Turalyon looked every inch the tried and hardened warrior. The two men followed Anduin down the winding path that snaked into the catacombs. “Shaw sent at least a dozen to monitor the waters between the Zandalari coast and the Eastern Kingdoms.”

“Let us go where there are no curious ears.” Anduin told them in a whisper.

Though the cathedral had largely emptied out after the evening service, a few brothers and priests remained. Of course they looked; who would not be eager to see the king of Stormwind present, and accompanied by two such illustrious warriors? To the people of Stormwind, Turalyon in particular was practically myth. His noble likeness had been forever commemorated as a statue in the Valley of Heroes rising above the bridge leading into Stormwind. He had helped forge the Knights of the Silver Hand, companion to heroes of legend and song like Uther the Lightbringer and Tirion Fordring.

All three stowed their conversation, making the long, sober descent into the crypts. Anduin hurried, though he dreaded what awaited him below. Still he went, for it was his duty to see what had befallen troops dispatched in his name.

The air grew colder, the scent of mud and brick reminding him of rainy autumn days. The fetor of stale air and dust followed, then a light perfume of dried flowers and herbs—a weak defense against the unmistakable odor of fresh rot. Fresh death.

At the very bottom of the crypts, where it was chill enough to bother even a man dressed all in furs, they found a row of bodies. Each was laid out and still in their sodden clothing, skin discolored, lips twisted in the agony of a mortal scream. Turalyon snatched a torch off the wall and charged ahead, sweeping the light over the corpses, his stoically handsome face pinched with concern.

“Look at the precision,” he said, standing before one young dwarf, his reddish beard full of sand and bits of seaweed. “One shot directly to the heart.”

Greymane joined the paladin at that body, carefully inspecting the arrow left sticking from the dwarf’s chest. “They are all like this. A single deadly shot. Mark the fletching on the arrows here and here: it has been shaved down.”

“That was why Shaw ordered them brought here,” Turalyon continued, his eyes fixed on the deceased dwarf lying between them. Anduin had never seen the war-forged paladin look afraid, and it was not fear in the man’s eyes then. Not fear, but rage.

“What am I not seeing?” Anduin asked, frowning.

“Zandalari arrows,” Turalyon replied. “But these are not Zandalari tactics.”

“I should think not! This is some mischief . . . some dark mischief I do not yet understand.” Greymane paced, lips curled as if a low worgen’s growl might emanate from his throat at any second. “There are few archers in the world that could make these shots, my king. The only sort I know are allied with the infernal Banshee Queen.”

“Dark rangers?” Anduin murmured, eyes darting between the two men. “Can we be certain?”

“Certain? No, but I’ve seen a damned mess of their arrows in my time and the style matches, and so does the accuracy,” Greymane huffed, pacing faster, every bit the caged and furious wolf.

“What would the dark rangers be doing in Zandalar? The Zandalari are allies of the Horde, and that would not make them friend to Sylvanas or her rangers.” Anduin had nearly put his hand down on one of the soldiers’ boots. Distracted, he had forgotten they were in the presence of the dead. But now he looked closer and felt keenly the stab in his chest. By the Light, they were all so terribly young . . .

He took small, cold comfort in the thought that at least the soldiers were home and protected in a sanctuary of the Light.

“It could be a warning from Sylvanas. Perhaps she sent her rangers to punish the new queen. The Dark Lady was still warchief when they made their alliance, but our spies believe Queen Talanji has pulled her support and remains largely independent. We all know how well Sylvanas takes betrayal.” Turalyon said gravely.

Anduin nodded, considering the paladin’s point of view, but Greymane had other ideas, tossing up his hands in frustration.

“This is our opportunity, Anduin, don’t you see it? Where Sylvanas goes her dark rangers are sure to follow. She may be close at hand, and these murders her critical mistake. We should gather what forces we can spare and sail west. Whether she is in league with the Zandalari or moving against them matters not; we must not squander a chance to finish this.”

He ended with a resounding note to his already galvanizing baritone, but Anduin didn’t move. Instead, he stared resolutely at Turalyon, who appeared unconvinced at best. The paladin shifted in his heavy golden plate armor, a crease of worry between his brows.

“Now is the time to think, my king, not the time to react. There are still spies unaccounted for in the field, and we must not forget the armistice. Zandalar is a vast continent, certainly, but the eyes there are friendly to the Horde, not to the Banshee Queen.” He tucked a fist under his chin thoughtfully. “The Horde wants her dead as much as we do. The armistice you signed is meaningless if we cannot rely on the Horde to share intelligence of this nature.”

“The armistice,” Greymane hissed, obviously unenthused. “We can rely on the Horde for nothing. How many times must we learn this lesson, Anduin? I know you know better.”

Anduin did. He did not necessarily trust the Horde, but he did weigh their actions. Were they untrue to their words, they would have assassinated him and his Alliance generals outside the gates of Orgrimmar before or after the mak’gora.

He waited a moment, hoping Greymane would calm down, but the man’s face had turned red with fury, his thick white whiskers bristling.

“Genn . . . ” Anduin tore his eyes away from his advisor and friend, instead raking his gaze across the bodies laid before them. “Rash action has harmed us far more often than care and caution. I will not overcommit to what could be a diversion.”

“We must ask ourselves: Why would Sylvanas go to Zandalar? What would she want there?”

“What does it matter?” Greymane thundered. “You said it yourself, Turalyon. The Zandalari queen pledged herself to Sylvanas first. Perhaps that vow remains true. Perhaps she has turned her back on the Horde and even now shelters the traitor and her soldiers.” He gestured to the fallen spies. “Perhaps these brave few were killed for discovering the truth.”

Anduin had a duty to the truth, whatever it might be. Both men provided opinions he valued, but he could not deny that Turalyon offered the more tempting take. Still. Still.

“I am reminded, my noble friends,” Anduin began softly. “Of a day not so long ago, and not so far from here. A placid place in the Arathi Highlands. A gathering meant to be peaceful, a gathering meant to reunite families torn asunder by forces they could never have foreseen . . . ” He sighed, leaning forward, resting his knuckles on the edge of the stone slab. “Human and Forsaken families met in good faith, trying to find common ground and common love—and many did. For their trust, for their grace, they received only slaughter.” He lifted his gaze to Greymane, who had gone mercifully still, the flush in his face fading. “I give your recommendations equal weight. Turalyon, take Alleria Windrunner and investigate these deaths.”

Standing tall again, Anduin pressed his hand over his heart, finding that Turalyon regarded him with a sure smile. He approved. “I name you High Commander of the Alliance forces. Your task—your only task—is to find Sylvanas Windrunner so we might bring her to proper justice. Hunt her day and night, use whatever means you must.”

Turalyon bowed his head with practiced gentility, accepting the honor and the charge with a humble, “My heart and my sword to the cause.”

Shadows Rising will be available in stores July 14 and is available to pre-purchase now. Missed any of our previous novels and watch to catch up on the story in preparation of Shadows Rising? Purchase them here.